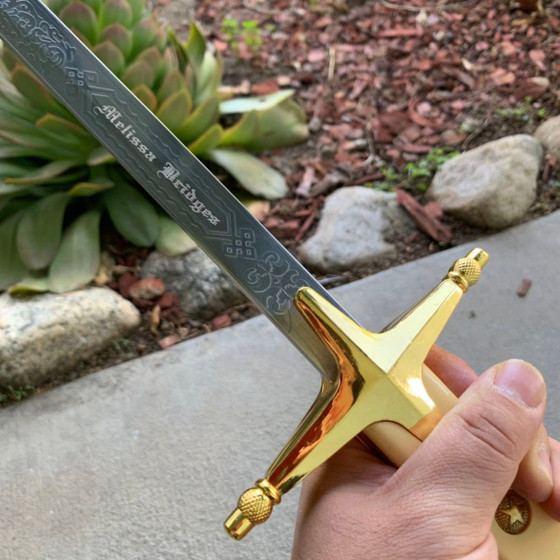 The blade of sword is 440 stainless steel with a sharpened edge. The design on the blade is acid etched deeply into the steel. The scabbard is a steel tube with a golden drag. Two more golden fittings secure the steel carrying rings at the top of the scabbard. A slim golden scabbard throat secures the blade in the scabbard. The guard is solid steel with a golden finish in the quillon style. The handle is imitation ivory with golden band of steel down the center. Star screws secure the handle. The pommel features the a golden eye hole for the sword tassel.

A Mameluke Sword is a cross-hilt, curved, scimitar-like sword. It is related to the shamshir, which had its origins in Persia from where the style migrated to India, Egypt and North Africa. Adopted in the 19th Century by several western armed forces, including the French Army, British Army and the United States Marine Corps, the Mameluke sword remains the ceremonial sidearm for some units to this day.

1805 was the birth of the Marine Officers Sword. Barbary Pirates had been attacking American merchant ships in the Mediterranean. As a result Marines were deployed to Derna. Under the command of Lieutenant Preseley O'Bannon a group of Marines marched across 600 miles of North African desert to attack the Tripoli fort of Derna. The was captured and O'Bannon was the first man to raise the American flag on foreign soil. A desert chieftain presented the Mameluke Scimitar to O'Bannon as gratitude and respect for his accomplishment. By 1825 all Marine Officers were required to wear the Mameluke Sword. It has stayed in the Marines ever since.